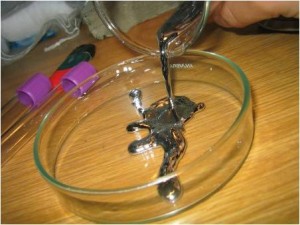 Fish are a great source of lean protein that should be a part of an anti-inflammatory diet. However, due to the toxicity of our current environment it’s important to know what kind of fish is safe for consumption.

Mercury, a heavy metal that when consumed in large quantity, can cause neurological damage. It is also the 2nd most toxic element on the plant behind Uranium. This heavy metal accumulates in rivers and oceans and then is absorbed by the fish. The higher the fish is on the food chain, the more mercury it’s going to contain from their consumption of smaller fish with mercury. For example Shark, King Mackerel and Swordfish are very high in mercury and should be avoided. Sushi fish like yellow fin tuna have moderate amounts and shouldn’t be eaten more than once per week. The safest fish for consumption are Salmon, Sardines and Pollock.

The EPA recommends the following for avoiding mercury in fish:
1. Do not eat Shark, Swordfish, King Mackerel, or Tilefish because they contain high levels of mercury.
2. Eat up to 12 ounces (2 average meals) a week of a variety of fish and shellfish that are lower in mercury.
3. Check local advisories about the safety of fish caught by family and friends in your local lakes, rivers, and coastal areas. If no advice is available, eat up to 6 ounces (one average meal) per week of fish you catch from local waters, but don’t consume any other fish during that week.

The FDA recommends that fish with .5ppm of mercury or less are safe for moderate consumption. Fish and Shellfish With Highest Levels of Mercury include KING MACKEREL, SHARK and SWORDFISH. The lowest levels of Mercury can be found in ANCHOVIES,  HADDOCK (Atlantic), SALMON (CANNED),  SALMON (FRESH/FROZEN), SARDINES, SCALLOPS, SHRIMP, SQUID, TILAPIA,
TROUT (FRESHWATER), TUNA (CANNED, LIGHT), and WHITEFISH.

The Low Down on Farm Raised Fish
Fish is also great source of Omega 3 fatty acids – the kind of healthy fat that reduces inflammation. Fish naturally produce a healthy ratio of Omega 3 to Omega 6 oils to protect themselves from the cold waters. Farmed-raised fish are typically raised in shallow waters that aren’t very cold, are fed corn and other cheap grains and are extremely crowded which leads to unsanitary pens. Due to these conditions, farmed raised fish produce a higher ratio of Omega 6 fatty acids to Omega 3 fatty acids which can raise our inflammation levels. Farmed-raised fish like tilapia and catfish have tested positive for excessive arachidonic acid, an Omega 6 fatty acid that can feed many of the inflammatory reactions in the body.

Another concern with farmed raised fish is the level of Polychlorinated biphenyls (PCBs), a toxic chemical that was banned in the 1970’s but still exists in the environment. Farmed raised fish have higher levels of PCBs, are fed a poor diet of grains, a food in which fish are not biologically meant to digest and are given antibiotics and pesticides to combat parasites and diseases that occur from living in crowded pens.

Bottom line – fish is great for you. Just choose the RIGHT fish!